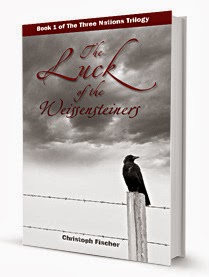 Another dark chapter of European History – The Luck of Weissensteiners by Cristoph Fisher
This is book #1 of ”The Three Nation Trilogy”
Christoph Fischer offers an eye opening on home,relationships and identity affected by war, political changes and moral issues raised by the union between a German man and a young Jewish woman in 1933 in the Slovak capital – Bratislava.
This is just about the time when Germany start to make waves in Europe and their relationship is changing,just as the all world around them is changing, like everyone else’s life who went through the grey and difficult events of the times.
The Luck of Weissensteiners is a very well written book about German and Jewish perspectives during the WW 2.

Christoph Fischer was born in Germany in 1970 as the son of a Sudeten – German father and a Bavarian mother.
Not a full local in the eyes and ears of his peers he developed an ambiguous sense of belonging and home in Bavaria.He moved to Hamburg in pursuit of his studies and to lied a life of literary indulgence.
After a few years he moved on to the UK.He spent many years in London and Brighton before finally settling in Bath, where he is still resident today.
“The Luck of Weissensteiners” is his first published work.Since then he has written several other novels.
http://www.christophfischerbooks.com
http://writerchristophfischer.wordpress.com/
On Amazon: http://bookshow.me/B00AFQC4QC
On Goodreads: http://bit.ly/12Rnup8
On Facebook: http://on.fb.me/1bua395
Trailer: http://studio.stupeflix.com/v/OtmyZh4Dmc/?autoplay=1
B&N http://www.barnesandnoble.com/w/the-luck-of-the-weissensteiners-christoph-fischer/1113932211?ean=9781481130332

3 thoughts on “The Luck of Weissensteiners by Christoph Fischer”