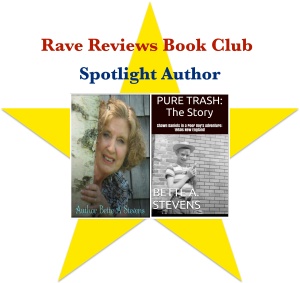 Excerpt from “PURE TRASH” By Bette A, Stevens

As a baby boomer that grew up in an average middle-class family in America during the 1950s and 1960s, poverty was not something I had to dwell on or even think about as a child or as a teen. As an adult, I learned what living in poverty was like from friends and acquaintances that grew up in this invisible (to me) world―one where being poor was an accepted part of life for those who lived it. I became intrigued by some of their stories. ~ Bette A. Stevens

“So long, Shawn and Willie. Now, don’t you boys eat all of those sweets at once,” Mr. Stark said as he smiled as we turned in our bottle and headed out the door cramming licorice sticks and bubble gum into our pockets. “See you boys at church tomorrow morning.”
“See ya tomorrow, Mr. Stark,” I called back and smiled.
“Can we head over to the playground, Shawn? Right now? Please, please, purty please?” Willie begged.
I finally said, “Sure, Willie, let’s go!

### END OF EXCERPT 2 ###
ABOUT THE BOOK: Experience the joy of a carefree Saturday and the blistering pain of feeling not quite good enough as you hop on a bike and ride into town with two delightful young boys who find adventure at every turn. Shawn and Willie Daniels live in the woods with no indoor water or plumbing. Dad spends most of his hard earned money on beer. Prejudice, class division, alcoholism, poverty, injustice, and bullying are cleverly woven into this 1950s adventure short. PURE TRASH is a prequel to the author’s upcoming debut novel.
Find Bette’s books at http://www.Amazon.com/author/betteastevens
You can find out more about Bette’s perspective on poverty and prejudice in her guest post on author MCV Egan’s blog http://ishistorytheagreeduponlie.blogspot.com/2013/10/poverty-prejudice-yesterday-today.html