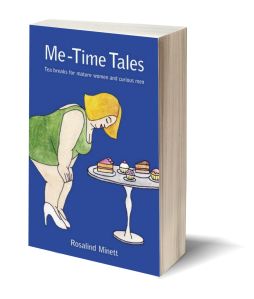 All kinds of women are unlocked in this book of short stories with a dark edge: Marian faces middle age with attitude and support knickers; sixteen-year-old Jess only considers dates with good legs; Peggy fights for her first bra; post-war Elfreda frees herself at a First Feast. There is Elaine’s encounter, a neurotic narrator’s self-enhancing theft, Pru’s ingestion, Daryl’s impregnation and an unnamed beauty’s transmogrification.

This collection of ironic short stories has been well reviewed on Amazon and Goodreads.

A wonderful collection of amusing and pertinent short stories, with expertly-crafted characters. ‘Underwhelmed’ – a delightful take on middle-aged loneliness and the perils of miscommunication – is told with a clever wit that had me laughing out loud.

Me-Time Tales is a collection of nine short stories and a poem featuring women’s voices. They’re quick and easy to read, full of enjoyable observations and dark humour. Minett’s characters are exhausted, ignored, cheated on and overwhelmed, but these stories give them space to be heard.

Quirky and humorous, these easy to read stories are deceptively deep and thought provoking!

There’s a tale for all ages in this entertaining set of short stories by Rosalind Minett. From the glorious gluttony in “First Feast” and the unexpected twist in the final story of “Anti-dote”, the ten tales are character driven, sometimes unnerving and always amusing.

These are delightfully quirky, amusing, and well written stories. The characters are real and often moving in their small town, suburban way – usually enduring slightly sad or unfortunate lives, but invariably finding a small redeeming and unexpected victory to lighten their path – and the colloquial style and snappy off-beat dialogue helps to maintain the feel of authenticity. Certainly five star writing.

Rosalind reviews as well as writes. She has two successful blogs: the quirky Me-Time Tales where the characters do the talking http://fictionalcharacterswriting.blogspot.com

and a serious blog about the process of writing, with thought-provoking articles and reviews of less usual fiction –http://characterfulwriter.wordpress.com

The Me-Time Tales blog has breached borders and courted many cultures, pleasing, since it is quintessentially British, ironic in tone, and unique.

It has already captured the attention of 31 countries including the USA, Russia, Philippines, Israel, Brazil, France. China, Germany, Pakistan, Uruguay and the Ukraine. Surpassing all initial expectations the upward trend continues; the views after its six months of life are well over six thousand.

Rosalind uses an avatar instead of a photo. The avatar saucily refers to her interest in Art. The two faces represent her serious and irreverent sides, the observer/recorder and inner/outer selves. After a career as a chartered psychologist, Rosalind now concentrates upon writing fiction. Her novel, A Relative Invasion, set in WW2, is expected early in 2014, with Speechless and The Parody to follow. In her hobby, sculpture, she finds a similarity between creating characters in writing and forms in three dimensions.

I write novels for preference. It takes me time to build up a character, laying down the seeds in the first chapters. I wrote The Parody first, a tale about identity and adult male identical twins. Then A Relative Invasion set in WW2 was sparked off by hearing an anecdote from an elderly man, the last to be chosen in a trail of evacuees. I wanted a counterpart to this (imagined) stocky little boy, and I conceived his rivalrous cousin, artistic and devious.  Lastly, Speechless emerged, the tale of a family whose child suddenly stops speaking.

Several times I’ve thought A Relative Invasion was ready to go, and each time I’ve ended up doing a re-write. I edit far more than I write but I’m hoping that two, if not three novels will come out in 2014.

To that end, I decided to test the publishing water by putting out a small book. Scanning down my documents, I saw that I had written about a dozen featuring women. I turned these into the collection that comprises Me-Time Tales. Near production time, I was told I had to engage in social media. A private person, someone who abhors Facebook and serial texting, I was appalled. ‘If you want your books to sell, that’s what you have to do,’ all my writer friends said. The book was already at the printers, so I knew I had to do something. I slept on it and came up with a solution.

I would do a blog about Me-time Tales but instead of writing about myself, I would let the characters do the talking. Instead of using my photo, I would have an avatar. So the Me-Time blog was born. If you visit it, you will see it is, as I’ve said, wacky. I call it a ‘character dialectic’, for although I appear, not very prominently and always under my avatar, the characters are in charge. I’ve let them dominate, which means they bitch about me as well as about each other.

The characters, I imagined, came together as a reading group, for if you read the book you’ll find each is of a different age and life situation, and with a different focus. They’re all self-obsessed in different ways.

In letting them talk and organise themselves, a narrative developed and there is now an ongoing engagement if not story. I’m never quite sure what the next post will bring. I just want each character to come to the fore, sooner or later, rather than let the bossy ones take the full stage.

I also have an interloper. The one male, a physicist, I’ve brought in from one of my novels. I thought I might need an objective voice from time to time.

This blog was all great fun, but some weeks into writing it I thought that, given that I have novels to bring out (for which really Me-Time was a trial run) none of which are comedies, I had better concoct a serious blog with comment about writing, reviews, and articles. That’s how thecharacterfulwriter blog came about.

I hope readers here will visit my blogs, even better, leave a comment so that I know that what I write has some meaning to someone.