Lorraine lives (mostly) in beautiful beachside Pottsville, NSW, but also loves travel and caravan living. After spending much of her working life as a technical, business and instructional writer, she is now happily semi-retired and loves to write short stories, dabbles in poetry-writing, and has written children’s book, Melanie’s Easter Gift (http://www.melanieseastergift.com) which was published in 2009.

Lorraine has written The Pencil Case, the confronting story of her husband’s life as a stolen Australian. The Pencil Case is available on Smashwords and Amazon Kindle and paperback.

Apart from her husband of 42 years and her wonderful family, Lorraine’s great loves are writing, reading, travel, and sewing, in roughly that order. She is currently working on her first novel, which she hopes to complete some time in 2014. 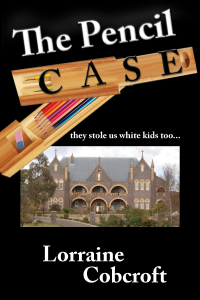 Paul Wilson was a fifth generation, native-born white Australian, and a stolen child. Bureaucrats stole him twice. So-called ‘women of God’ and a misguided carer stole his identity, his heritage, and his self-respect.

Highlighting the terrible consequences of flawed Government policies, misguided decisions by bureaucrats, and cruelty and child abuse, “The Pencil Case” is a story you will read between tears and fits of rage.

Journey into the home and lives of a battling Aussie bush family and weep over cruel injustice that breaks a mother’s heart and kills a father’s soul. Witness child abuse and deprivation in an almost Dickensian world. Meet foster parents whose dedication and caring gives orphans and waifs hope for a future. Then follow Paul Wilson’s struggle through adult life, sharing his and his family’s pains and joys. Celebrate his triumphs; mourn his foolishness; admire his strength and courage as he fights continuing injustice, haunted by demons from his past and nursing an insatiable thirst for revenge.

Confronting, heart wrenching, yet heart-warming, this is a story that illustrates the beauty and strength of the human spirit. It’s a story about inspiration and triumph. Ultimately, it’s a story about the power of family love.

The Pencil Case is a story of terrified children taken away from home, into a foreign universe by social services. Jenny and Paul Wilson are taken from their home and sent to a social home administered by Catholic Nuns.Their parents could do nothing to prevent this and their only hope is that they will not separate them.They coped because they had no other choice.

Lorraine Cobcroft describes the little boy’s life, accumulated pain and frustrations of a long and painful period of imprisonment and separation from his family.Hurting his little soul, the isolation and humiliation, and the deep feeling of being unwanted changed him forever, made it difficult for later adult man to reveal his feelings or show any kind of emotions.

In her book, The Pencil Case,Lorraine explain how the thinking and behavior was influenced by a flawed system and social prejudices.As a reader I could feel Paul’s frustrations and his inability to express himself.Lorraine show us what a struggle the life is,and how hard for little Paul, now an adult, is to forget the abusive treatment and learn again how to live happily within a family, learn again what love and hope means.
The Pencil Case opens another way of looking at sometimes unbearable and hard to understand behavior of people around us.Knowing what Paul had to suffer, and going together through his adult life, readers can see his fight to become a normal person and how the power of forgiving gives him the strength to live the past behind and go on with his life.
The book its important for future generation to learn and understand how the foundation of their world were built and how their forebears lived, before Australia become a country of peace and prosperity.

One thought on “The Pencil Case by Lorraine Cobcroft”