Music is spiritual. The music business is not.
Van Morrison

The Power of Music is present in everyones life and has an influence on people all over the world.There are people who are looking at music as a pleasure or people who see music only as a business. 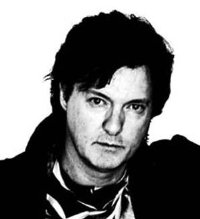 Russell had always helped other artists and advised them as he had pretty much worked on all sides of the music business and so he was asked to write a book to help upcoming bands so that they didn’t get ripped off. Music Business Bastards (How to do well in the music business without getting ripped off) the original version was the result. He also consulted and worked for a number of big companies including the BBC and Dr. Martens amongst others. 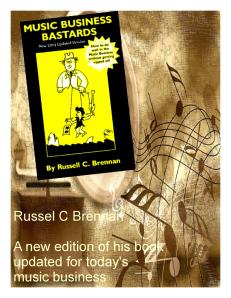 He was also Editor and writer of best selling influential youth fanzine  ‘Dedicated Follower’ that is now housed in the Victoria and Albert museum  as a testament to the youth culture of the day.

Fast forward to the new millennium and after being nominated for UK record producer of the year and doing the last cult themes album Cult Themes from the 80’s he decided to take a break from the music industry to go back to writing books and scripts as well as taking his photography more seriously.

An autobiography, novels and a number of film scripts have been completed and some are to be made into films and Russell is also moving into directing. He had actually directed a number of pop videos for FLR including one award winner.

After getting a number of offers from major film companies for his scripts he declined these because he really has a strong vision as a director and wants to direct all his scripts and so formed his own film company Department-F. While bogged down getting his films funded he made two documentaries ‘The Eleanor Rigby Story.

Eleanor Rigby also made one album ‘Censorship’ which is considered a classic album and many know musicians Including Shirley Manson (Garbage) members of Blur and Jello Biafra (Dead Kennedy’s) all cite it as one of the best albums ever made. So a documentary about the making of this album has also been completed. Both documentaries are currently in post production.

Russell has also written and devised 6 TV shows including one truly ground breaking one that have gained the interest of The BBC and others and he is currently developing these while waiting to get the green light for his feature film.

It’s no surprise to learn that his first feature film is a music business revenge thriller ‘Over and Over’. He has 95% of cast and crew on board and just needs to fill a few positions and gain more funding at present.

He is also getting due recognition of his other skills with one website listing him in ‘The top 20 most innovative record producers of all time’ and 15 of his photos are to feature in a London photographic exhibition in 2013 ‘The most iconic rock photography of the last sixty years’.

Over the years he has also lived the life of an adventurer and people say he lives his life like a dime store novel. Many reading his work cite him as the new Hunter S. Thompson but without the drugs.

Many of his stories are very original and often based on true-life experiences. However is first book this year (2013) is an updated version of his previous popular book ‘Music Business Bastards (How to do well in the music business without getting ripped off). A book of his photography and lyrics is due out to coincide with the exhibition mentioned earlier but it’s his 4 novels that are getting publishers hot under the collar at present. 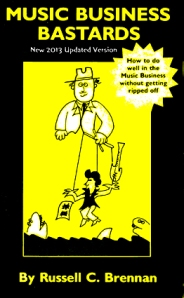 Russel Brennan book has such a big impact because he uses his own    experiences  in the music business and that give the readers trust in what he is  saying.

In his book he reveals what is behind the scene in the music industry and how  everyone who is involved must be aware about record deals, touring and  publishing rights, entrepreneurship without forgetting the dedication of the artist.

Rethinking rights, protect the value of the copyright and royalty revenue from music copyright.

Music Business Bastards – How to do well in The Music Business without getting ripped off is now at the third edition, updated for today’s music business.